One of the top male players in the world French Outside Hitter N'Gapeth is also one of volleyball's biggerst characters.
Height
6'4"
194cm
Birthplace
FRA
Saint-Raphael
Age / Birthday
31
12 Apr 1991
Follow 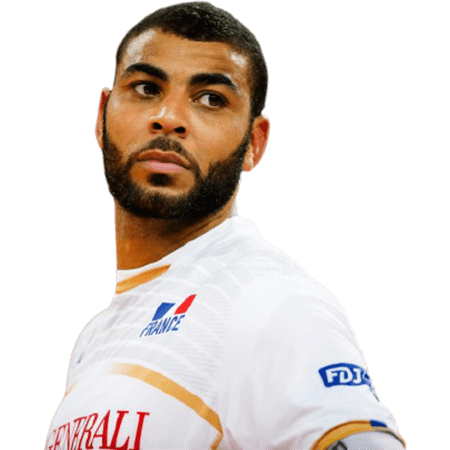 Earvin N’Gapeth is a French international volleyball player, currently playing for Zenit Kazan in Russia. A physically imposing athlete and Outside Hitter, his vertical leap and power have made him one of European volleyball’s biggest stars.

Earvin N’Gapeth made his professional debut for Tours in 2008, aged just 17. There, he won the French Cup for three consecutive years, as well as the French Championship in the 2009 – 10 season. Meanwhile, at international under-19 and under-21 level, he was already making waves, winning the CEV European Championship in both age groups and being named Best Server and MVP in the 2009 U19 edition. In the 2011 season, he was named the best player and best spiker in Pro A, shortly before he left Tours.

A move to Italy

Having made the switch to Italy with Bre Banca Lannutti Cuneo, N’Gapeth’s only success was a silver medal in the 2012 / 13 CEV Champions League. He was also part of the French national team that finished 7th at the 2011 European Championship, having been kicked out of the 2010 World Cup squad mid-tournament, for disciplinary reasons.

Having signed for Kuzbass Kemerovo for 2013, N’Gapeth left the squad mid-season to sign for Modena back in Italy. It proved to be a good move, as the team won two Italian Cups, two Italian Super Cups, and one Italian Championship in four seasons. N’Gapeth was also named the Coppa Italia’s best player in 2015. However, it was with the national team that Earvin N’Gapeth finally delivered on his enormous potential, as the French team won both the 2015 FIVB World League and the 2015 European Championship – the first international gold medals the side had ever won. N’Gapeth was named best outside spiker in both tournaments, and the FIVB World League MVP.

The French team continued to succeed at the highest level, winning bronze at the 2016 World League, then gold again in 2017 and silver at the 2018 Nations League. This period of success culminated in a big money move for N’Gapeth, to Zenit Kazan in Russia. In 2018, Kazan won the CEV Champions League for the fourth consecutive year, before winning silver in 2019 behind surprise winners Cucine Lube Civitanova. Kazan also finished third at the FIVB Club World Championship in 2019, having won the 2018 Russian Super League, the 2018 Russian Super Cup, and the 2018 and 2019 Russian Cup.

Earvin N’Gapeth is the son of ex-Olympic volleyball player, Eric N’Gapeth. He is a brand ambassador for Adidas, and reportedly got engaged to his girlfriend in June 2019.

Outside of volleyball, Earvin N’Gapeth’s scandals have affected his career and personal life. Following a suspended sentence for a nightclub fight in Montpelier in 2014, N’Gapeth was arrested again in 2015, this time for assaulting a TGV ticket inspector in Paris because he wouldn’t delay the departure of a train for one of N’Gapeth’s friends. Then, in 2019, he was arrested again, this time in Brazil, for sexual assault on a woman at a party.