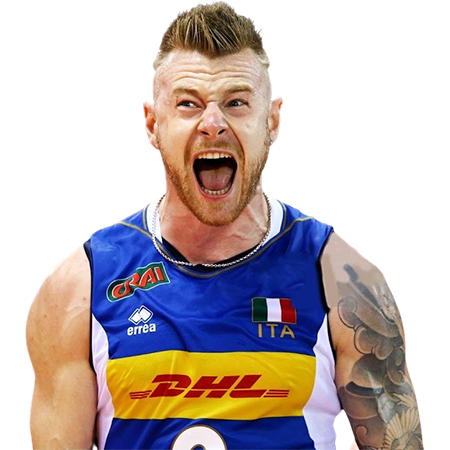 Ivan Zaytsev is an Italian volleyball player and the current captain of the Italian men’s team. Zaytsev is of Russian origin, but was born in Spoleto, Italy because his father, Vyacheslav, was playing there at the time.

Zaytsev’s early career saw him play as a setter for Umbria Perugia, but he quickly changed positions and settled into his new role as a Right Side Hitter. With a huge vertical jump, his spike height has been measured at 360cm and his height and power have always been huge assets. After leaving Umbria Perugia in 2006, he signed for M. Roma Volley and aside from a season out with Andreoli Latina, this was to be his home for the next five years.

National Debut and Rise to Prominence

In 2008, after 10 years’ continuous citizenship, Ivan Zaytsev qualified for Italian citizenship. He made his international debut the same year, but it wasn’t until 2011 when he got his first taste of silverware, either for club or country. Italy made the final of the European Championships, losing 3-1 to Serbia in the final. Zaytsev’s performances were good enough for him to make the switch to Lube Banca Macerata soon after, and the decision was rewarded with an immediate victory in the Italian Super Cup and the MVP award for the 2012 Italian Championship.

With the national side, 2012 represented Zaytsev’s first Olympic experience, and Italy claimed the bronze medal ahead of Bulgaria, having been beaten by Brazil in the semi-finals. This was followed by a bronze medal in the 2013 FIVB World League and further recognition as Best Outside Spiker.

Then, Italy won a second consecutive silver medal at the European Championships, losing this time to Russia in the final.

In 2014, Ivan Zaytsev moved abroad to play for Dinamo Moscow in Russia. The team won the 2014/15 CEV Cup, but with the national side, Zaytzev also won a bronze medal at the CEV European Championships, and a silver medal at the FIVB World Cup. In both tournaments, he was named Best Opposite Spiker. A brief move to Al Arabi, and a victory in the Emir of Qatar Cup was to follow, but it was at the 2016 Rio de Janeiro Olympics where Zaytsev claimed arguably his greatest accolade to date, a silver medal. After a hard-fought semi-final victory over the US, Italy lost 3-0 to Brazil in the final, but Yaytsev finished the tournament as Best Server and third best scorer, as well as claiming an Olympic record for serving speed, with 134kph.

A Return to Italy

Following the Olympics, Ivan Zaytsev returned to Italy with Sir Sicoma Colussi Perugia. In two seasons, the side won the Italian Super Cup, the Italian Cup and the Italian Championship, as well as the silver medal at the CEV Champions League. But Zaytsev’s time with Perugia came to an abrupt end when they signed Wilfredo Leon in 2018, prompting a switch to Modena Volley for the 2018 – 19 and 2019 – 20 seasons.

Ivan Zaytsev is the son of former Olympic gold medal and World Championship winning volleyball player, Vyacheslav Zaytsec, who competed for the Soviet Union in the 1970s and ‘80s. He is married and has a son and a daughter. He has previously had an advertising contract with Red Bull and has made numerous TV and film appearances.