One of the most successful players of all time Brazil's Outside Hitter Jacqueline Carvalho is a legend of the sport.
Height
6'1"
186cm
Birthplace
BRA
Recife
Age / Birthday
38
31 Dec 1983
Follow 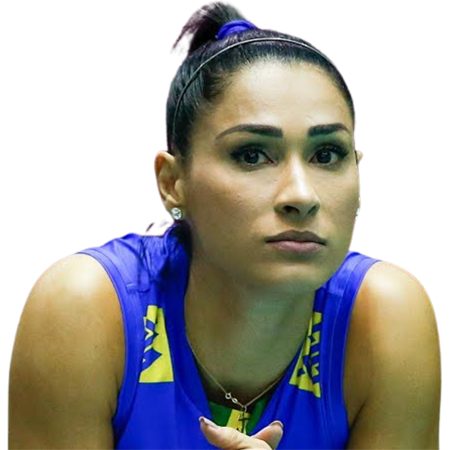 Jaqueline Carvalho is a Brazilian volleyball player. As a member of the Brazilian women’s volleyball team, her nine gold medals, including two Olympic golds, make her one of the most successful players in the history of the women’s game.

Born in Recife, Brazil, Jaqueline Carvalho started playing for her local side, Sporting Recife, at the age of 13. However, it was Osasco Voleibol Clube, in Sao Paolo, where she made a name for herself in the club game. Her first of three separate stints for the club began in 2002, and she would go on to win nine club titles in the following ten years, including four consecutive South American Club Championships and one World Club Championship title.

Having been named the Most Valuable Player at the FIVB U20 World Championships, which Brazil won, Jaqueline Carvalho signed for Osasco and won two consecutive Brazilian Superliga titles, in 2002 – 03 and 2003 – 04. She then moved to Rio de Janeiro to play for Rexona Ades (now Rio de Janeiro Voleibol Clube), winning her third Brazilian Superliga title in her second season at the club, aged 21. That same year, she experienced international success at the highest level for the first time, as the Brazilian women’s team won the gold at the world grand prix in Sendai, Japan.

This was the beginning of a period of dominance for the Brazilian women’s volleyball team, and the most successful period of Carvalho’s career. In November 2005, Brazil won the World Grand Champions Cup in Tokyo, then defended their World Grand Prix title in Calabria the following year. A surprise loss to Russia in the final of the FIVB World Championships was to follow, but Jaqueline Carvalho was named best receiver in the tournament.

In 2007, Brazil won the silver in the World Cup in Japan, then stormed to the gold at the Beijing Olympics in 2008, losing only one set in the whole tournament. They would defend the title in London four years later despite a disastrous group stage campaign that ended with the team a single point from elimination. The Brazilian team also took silver at the 2010 World Championships (behind Russia again), won the 2008, 2014, and 2016 World Grand Prix titles, and the 2013 World Grand Champions Cup. In an extraordinary 11-year spell with the national team, Jaqueline Carvalho had won 15 medals and been named Best Receiver twice.

Meanwhile, Carvalho had also found the recipe for success in the club game. After three years abroad, in Italy and Spain, she returned to Osasco (now called Sollys Osasco) and played a key role in the most successful period in the club’s history. Two Brazilian Superliga titles were followed by a remarkable four consecutive South American Club Championship titles (2009, 2010, 2011, 2012), during which time Carvalho was named the MVP twice and Best Server once. This culminated in a gold medal at the 2012 FIVB Club World Championship, the first and only time that Osasco had ever won the title. Carvalho also won Best Receiver.

In 2014, Jaqueline Carvalho moved to Minas Tenis Clube and played for two seasons in total, with a year at SESI-SP in between. After a further season at Hinode Barueri in 2017 – 18, she returned to Osasco for the 2019 – 20 season. In 2018, she announced her retirement from international volleyball.

Jaqueline Carvalho is married to 16-time international gold medal winning volleyball player, Murilo Endres. The couple have one child together. While her best years are perhaps behind her, Carvalho returned to the limelight for the wrong reasons in 2019, when she fainted during a TV interview, which then went viral.