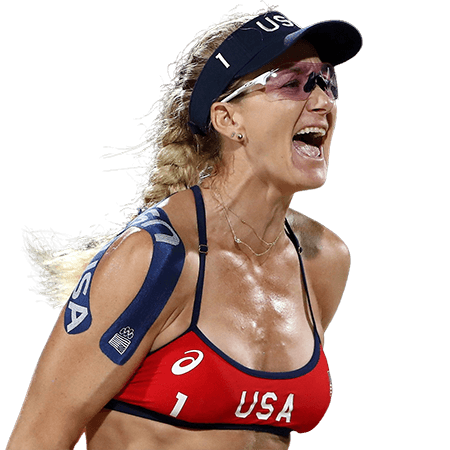 Kerri Walsh Jennings started playing indoor volleyball at Archbishop Mitty High School, San Jose, California, where she was part of the team that won three state championships (1993-95). In 1996, she won the Gatorade National High School Volleyball Player of the Year. This success at high school led to her being awarded a volleyball scholarship to Stanford University.

At Stanford, Walsh Jennings also excelled, helping the team to four Pac-10 titles and two NCAA championships as well as being selected as an first-team All-American four years in a row and winning the National Player of the Year in 1999. She was then selected for the US Women’s Indoor Volleyball team to compete at the 2000 Olympics in Sydney, while still a student at Stanford. The team finished 4th, but Walsh Jennings wasn’t allowed to play for several of the games because of a positive drug test. However, the test was proven to be false and Walsh-Jennings was cleared to play in the later stages of the tournament.

Misty May and Kerri Walsh Jennings

After graduating from Stanford in 2001, Kerri Walsh Jennings turned her attentions to beach volleyball, teaming up with Misty-May Treanor as her playing partner. Together, they were to dominate the beach volleyball scene from 2003 to 2009, winning every possible accolade in the sport, most on multiple occasions. In 2003, the pair won 90 straight matches culminating in the FIVB World Championships, where they beat defending champions Brazil in Rio de Janeiro. From here, they won the 2005 and 2007 World Championships, the 2004 and 2008 Olympic gold medals, and a minimum of 3 FIVB Beach Volleyball World Tour events every single year from 2004 to 2008. In 2008, they also broke their own record for a winning streak, going 112 games unbeaten before losing in the AVP Crocs Cup Shootout in 2008 following an unprecedented run of 19 straight titles. This run, along with their previous successes, made them the most successful beach volleyball pairing in history.

After an extended period playing with temporary partner Nicole Branagh due to injuries to Treanor, the pair were reunited in time for the build-up to the London Olympics in 2012. And once again, Misty May and Kerri Walsh won the gold medal against the other US pairing of Jen Kessy and April Ross, for their third consecutive Olympic gold medal.

Having beaten her in the Olympic final in 2012, Kerri Walsh Jennings chose a new playing partner in April Ross, following the retirement of Treanor. A further 11 FIVB World Tour titles followed for Walsh-Jennings, eventually resulting in her 113th title, breaking the previous world record, held by her old playing partner Treanor. Walsh Jennings and Ross then reached the semi-finals at the Rio de Janeiro Olympics in 2016, losing to a Brazilian pairing before beating another Brazilian team to win the bronze medal. This meant that Walsh Jennings had won four straight Olympic beach volleyball medals, making her the most decorated beach volleyball player of all time – male or female.

Bid for Tokyo 2020 with Brooke Sweat

In 2017, a dispute with the AVP resulted in Walsh-Jennings declining to sign a new contract, effectively ending her playing partnership with April Ross. She briefly re-teamed with Nicole Branagh before announcing that she would team up with Brooke Sweat in an attempt to qualify for her sixth Olympics. And in 2019, Walsh-Jennings extended her own record for beach volleyball titles with victory at the Jinjiang Open in China, the 13th different year in which she had won an FIVB World Tour title.

Kerri Walsh Jennings married fellow professional beach volleyball player Casey Jennings in 2005. They have three children. The pair appeared on Celebrity Wife Swap in 2015. As well as this TV appearance, Walsh Jennings has also appeared on CSI:Miami, Shaq Vs., Extreme Dodgeball, Rollergirls, and Hell’s Kitchen. She has also featured in many other magazines, on sports shows, and in features around the world.