Already considered one of the best players in the world whilst a teenager, Paola Egonu will be a key player for Italy for years to come.
Height
6'3"
190cm
Birthplace
ITA
Citadella
Age / Birthday
33
18 Dec 1988
Follow 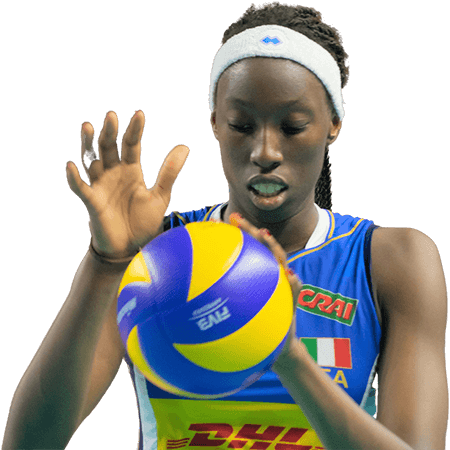 Paola Egonu is an Italian volleyball player from Cittadella, Italy. A tall, powerful athlete, despite her tender years, Egonu is already considered one of the best players in the world and became a FIVB Volleyball Women’s World Championship silver medal winner while she was still a teenager.

Egonu was on the books at her first club, Club Italia, from the age of 15, though she started playing regularly in 2015, the same year as she was first selected for the Italian national team. Playing as an opposite or wing spiker, her height, power and athleticism made her an immediate hit in the game. Indeed, Paola Egonu’s vertical jump is the subject of many highlight clips on YouTube.

Following her call-up to the Italian national team, Egonu played in the Europe Olympic Qualification tournament for the 2016 Olympic Games and was awarded best outside spiker. Italy went on to qualify for the Olympics, although they narrowly missed out on a quarter final spot. Nevertheless, Egonu was one of Italy’s best players despite still only being 17 years old.

Success with AGIL Novara and the Italian national team

Following the Olympics, Paola Egonu was signed by AGIL Novara and won the 2017 Italian Supercup and the 2017-18 Coppa Italia, which AGIL then defended the following year before winning the CEV Women’s Champions League. This was a run of form that proved timely for a number of the Italian national team, as they went on a run to the final of the 2018 FIVB Volleyball Women’s World Championship, one which included a perfect 9 wins in the group stages. Unfortunately, though, they narrowly lost 3-2 to Serbia in the final and had to settle for the silver medal. Nevertheless, Egonu’s reputation on the world stage had been cemented; as well as being the tournament’s top scorer, third best spiker and second-best server, she won the award for best opposite spiker.

Paola Egonu moved to reigning Serie A champions Imoco Volley Conegliano in 2019, winning a second Italian Supercup shortly after. But her greatest club success came when Conegliano won the 2019 FIVB Volleyball Women’s Club World Championship, the first Italian side to do so for over a quarter of a century. Paola Egonu was named the tournament’s MVP as they came from a set down to beat Eczacıbaşı VitrA İstanbul 3-1 in the final. Imoco Volley Conegliano then won the Coppa Italia for the 2019-20 season, Egonu’s third victory in the tournament.

Paola Egonu is of Nigerian descent, with her father, Ambrose, hailing from Lagos and her mother from Benin City. Egonu is openly lesbian and until 2019, she was reported to be in a relationship with Polish teammate Katarzyna Skorupa.