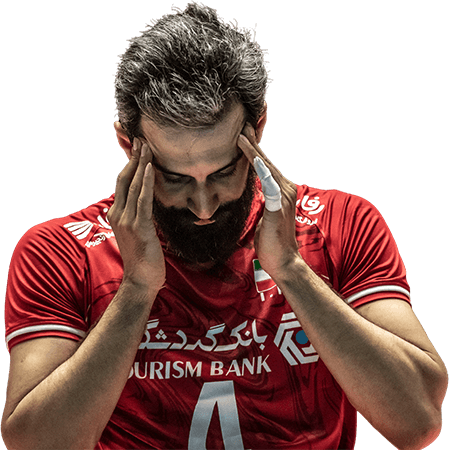 Starting his career at Shahrdari Urmia (now Pegah Urmia) in the 2003 – 04 season, Saeid Marouf quickly established himself as a talented setter, but it wasn’t until 2005 when he won his first gold medal – the Iranian Super League – with his second club, Sanam Tehran, when he was still only 19 years old. In the same year, Marouf received his first call-up to the Iranian national team, but it wasn’t until 2007 that he established himself as a vital part of the squad.

In 2008, despite finishing 6th in their qualification group for the Olympics and ultimately failing to reach the tournament, Saeid Maroud was named Best Setter while representing Iran. He would repeat this feat at the 2010 Asian Cup, which Iran won, successfully defending their 2008 title. He also won a silver medal at the 2009 Asian Championship.

After a second Iranian Super League title with Sanam Tehran in 2012, 2014 was the most successful year of Saeid Marouf’s career, with gold medals in the Iranian Super League and the Asian Championship, both with Matin Varamin. He was also named the Iranian Sportsman of the Year by the Iranian Students News Agency and Best Setter in the 2014 World League, in which Iran finished a creditable 4th, beating Brazil during the tournament. Iran also won the gold medal in the Asian Games that year.

In the 2014 – 15 season, Marouf left Shahrdari Urmia midway through his second stint for the club to sign for Zenit Kazan in Russia, on a deal worth over $1m a year. At the time, Saeid Marouf’s net worth made him one of Iran’s best-paid sports stars. At Kazan, he became a member of the team that successfully defended their Russian Super League title, won the Russian Super Cup, the Russian Cup, the CEV Champions League and finished second in the FIVB Club World Championship. However, after one season, he returned to Iran with Shahrdari Urmia, before signing for Paykan Tehran, where he stayed for three years.

Meanwhile, the success of the Iranian national team continued. Having successfully reached the 2016 Olympics, Iran managed to make the quarter finals, losing 3-0 to eventual runners-up, Italy. However, with gold at the 2018 Asian Games, gold at the 2019 Asian Championship, and bronze at the World Grand Champions Cup in 2017, Marouf continued to rack up the medals. As of 2020, he has 9 international medals to his name.

After a season in Italy, Saeid Marouf signed for Beijing BAIC Motor in 2019, in the Chinese Volleyball Super League. Meanwhile, with Iran having qualified for the Tokyo Olympics, now due to take place in 2021, Marouf will also have one last chance to win an Olympic medal before a likely international retirement ahead of 2024.